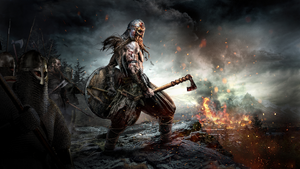 Slavs are one of the available nations in Ancestors Legacy.

In 10th Century, Central Europe was divided by dozen self-governed and divided against themselves tribal authorities - despite speaking one language, having same pagan beliefs and similar economic development. One of the biggest and most influential tribe was the tribe of Polans, governed by the Piast dynasty with a firm hand of a young prince Mieszko I.